A Gory Legend from Krakow 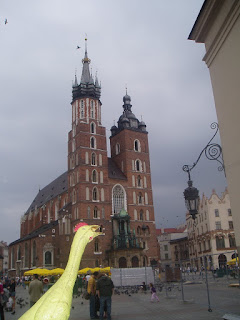 Here I am in Krakow, Poland. I’m standing in the Main Market Square which is the largest medieval town square in Europe.

Look behind me and you’ll see a gothic church named St. Mary’s Church. Did you notice that the towers are different from each other? One of the towers is much taller.

There’s a gruesome legend about the towers. Those of you with squeamish stomachs, stop reading now.

Back in the 15th century, there were two brothers skilled in architecture. They were asked by the town’s people to build the new church towers.

Once the building started, it became obvious that the younger brother wasn’t as talented an architect as his sibling. No matter how hard he tried, his tower didn’t rise as quickly as his brother’s. He became very jealous.

Finally, he became so envious that he stabbed his brother to death.

After calming down, he felt awful about what he’d done. He climbed up the highest tower and threw himself down.

The supposed murder weapon still hangs above one of the doors in the old Cloth Hall across the square.

Now this is just a legend, but let it be a lesson to us all. Sibling rivalry never pays.
Posted by Kimberly at 12:24 PM