Mystery in the Airplane Toilet 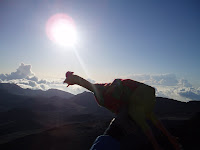 Winter break is just around the corner and some of you may be flying to a holiday destination. Have you ever given a thought about what happens to the contents of those airplane toilets?

Airplane toilets are different than the ones at home. Most land toilets work on a gravity based plan; when you flush, approximately 6 litres of water fills the bowl. It’s then sent with the waste down to the sewer. This system wouldn’t work on an airplane because if the plane goes through a bumpy spot, the water would splash all over the person perched on the toilet. Depending on where they were in the process, it could get really ugly.

Airplane toilets use a powerful vacuum which makes a rather frightening noise. About 2 litres of blue cleaning liquid helps clean out the bowl as the yucky contents are sucked through narrow pipes to the holding tank.

In the old days, when bucket toilets were still used, airlines dropped the contents unto the unsuspecting world below. Now this is illegal, however, accidents have happened when a leak occurs in a jet washroom.

At higher altitudes the leak turns into blue ice. When the plane descends it starts to thaw and creates an unappealing missile which falls to the earth.

A number of years ago in California, a blue poopsickle hurtled from the sky and broke through the skylight of a boat. The owner took the airline to court and won.

Close your umbrellas, guys. This was an unusual case.

Once waste goes to the airplane holding tank, it cannot be released from inside the plane. It can only be pumped out of a valve on the outside of the aircraft. The smelly gunk is then sent to a waste treatment facility.

Personally, I still prefer the drop as you fly method used by my fellow birds.
Posted by Kimberly at 11:49 AM