Ravens at the Tower 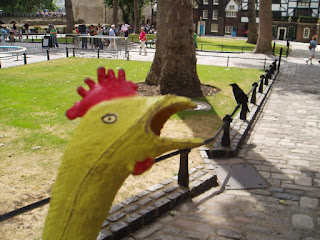 Here I am at the Tower of London in England. Take a good look at the Raven in the picture. He’s really important.

There’s an old English superstition that says if the ravens ever leave the Tower of London, the monarchy and kingdom will fall.

Most people don’t believe this but to be on the safe side, the British Government pays to take really good care of ten tower ravens. They keep six official ravens and four spare ones…just in case.

A Beefeater (also known as Yeoman Warder) is put in charge of caring for these birds.

During WWII all the ravens except one died from the shock of bombing raids. The British quickly replenished the flock.

In 2006 the Beefeaters brought the birds inside for a few months to make sure they didn’t catch avian flu. I still say they should have done the same thing for all those unfortunate chickens.

The ravens don’t fly away because the flight feathers on their wings are clipped. It doesn’t hurt the birds, it just makes flight difficult.

Ravens live between 25-45 years, unless they come to an early, unfortunate end. The tower’s oldest raven was named Jim Crow. He was 44 when he kicked the bucket.
Posted by Kimberly at 11:10 AM