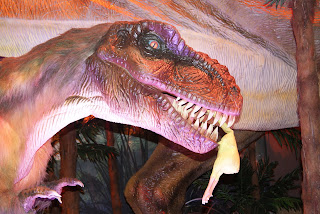 When I heard that many scientists believe modern-day birds are descended from dinosaurs, I had to check it out. So off I went to Sudbury, Ontario’s Science North to see a special exhibit called Dinosaurs Unearthed.

It was fabulous. I learned that dinosaur fossils with feathers were recently discovered in China! Many scientists even think that baby T-Rexes were covered in a type of feather to keep them warm. Here’s a picture with me and a cuddly animatronic (that means it moves) baby T-Rex.

Speaking of animatronic, there are 14 full sized moving dinosaur figures in the exhibit and almost 30 fossil replicas. They even have eggs.

Don’t miss out. The exhibit leaves Science North in September
Posted by Kimberly at 10:23 AM