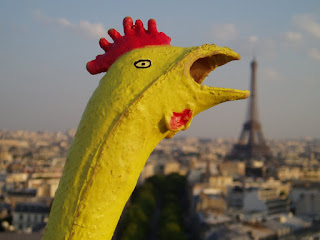 Think of Paris, France and most people think of the Eiffel Tower.

In 1885 the French were planning the Great Exposition to mark the 100th Anniversary of the French Revolution. They wanted a monument and they wanted to build the world’s tallest building.

Many Parisians hated the idea because they worried that it would ruin the look of the Paris skyline.

Despite complaints, French officials announced a competition for the best design of an iron tower in the Champs de Mars (a French park). The main rules were that the tower had to make enough money from ticket sales to pay for its construction and it had to be temporary and easily taken down at the end of the Exposition.

There were some weird entries into the competition. One person designed a large guillotine shaped tower. Another proposed a 1000 ft sprinkler that could water all of Paris when it got really dry.

Alexandre-Gustave Eiffel got the job. The government agree to keep the tower up for 20 years if he paid for most of the construction. He also got to keep the ticket sale money for those first 20 years. The tower didn’t take long to pay for itself and Mr. Eiffel made more than just chicken feed from his project.

It took only two years to build the tower.

Bring a compass with you when you visit the tower and you’ll see that its legs point exactly north, south, east and west.

It’s a bummer but during busy periods, you can wait for hours to get into the tower.

My favourite thing to do is to pack a picnic, go in the evening, sit in the Champs de Mars and watch all the lights on the tower sparkle for ten minutes, every hour. It’s magical.
Posted by Kimberly at 9:04 AM