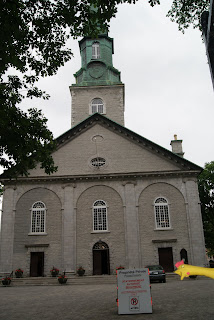 I love a good ghost story. I found one in Quebec City at the Holy Trinity Cathedral, the oldest Anglican cathedral in Quebec City.

Many people have seen a lady floating around the balcony in the church. This lady especially seems to affect organists who hear a female cry and feel cold chills while they practice. Sometimes the organ plays by itself or footsteps are heard when no one is around. Now that’s enough to give anyone goose bumps...oops, I already had those.

Animals also feel the ghostly presence and are at times nervous and jumpy when in the church.

Queen Elizabeth II actually saw the ghost on the balcony when she visited in 1964. She was spooked and let me tell you, she’s no chicken.

Who is this lady ghost?

One theory is that it’s the ghost of a former nun who had a baby. The baby died and is said to be buried in an unmarked grave in the church crypt. Organists have found that if they put toys on the grave, they are allowed to practice in peace. It’s as though she is watching over her child!

Another theory is that it’s a lady who was mistakenly buried alive near the church during an outbreak of cholera.

A third theory is that it’s a woman that was buried in the church’s foundation during construction in 1799-1804.

Whoever she is, this tortured soul still continues to visit the Holy Trinity Cathedral.
Posted by Kimberly at 3:55 PM