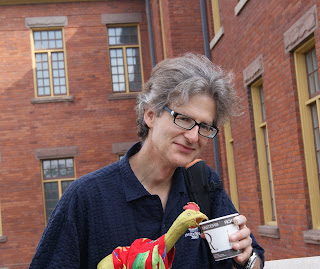 Some may think I’m just another pretty face but I also have a cultured, literary side. I’ve read many of the worlds greatest classics including Walter the Farting Dog, Captain Underpants, Horrible Histories and The Nose from Jupiter.

This week I’ve been mixing with some of Canada’s great authors at The Humber School for Writers in Toronto, Ontario. Here’s a picture of me giving author Richard Scrimger some valuable suggestions for his next book over a cup of coffee.

Richard also gave me some helpful advice. “Bob, the coffee shop’s around the corner.”

Richard writes for both kids and adults. He’s hatched fifteen books in his career including The Nose from Jupiter series of four books, The Way to Schenectady, Of Mice & Nutcrackers, From Charlie’s Point of View and Into the Ravine. I just picked up his latest teen book called Me and Death.

For more information, check out Richard Scrimger on line.
Posted by Kimberly at 7:40 AM