Warrior Emperor and Air Conditioning at the ROM 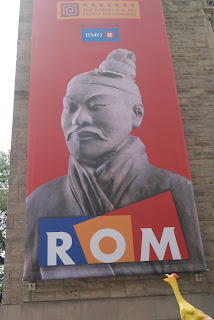 To beat the heat, I joined the family on a visit to the Royal Ontario Museum. The air conditioning was cool and so were the terracotta warriors.

I saw ten life size figures and horses from the tomb of China’s warrior emperor, Ying Zheng. In 1974 the Warrior Emperor’s tomb was discovered in China along with 8000 terracotta figures, all different. They’d been buried for over 2,200 years. Boy did they have some catching up to do.

The Warrior Emperor had a busy life. At 13, he became the King of Qin, then went on to build an empire to rival Rome but his empire lasted much longer. During his lifetime, he started many building projects including a section of the Great Wall of China.

To find out more about him, check out the ROM’s Warrior Emperor and Terracotta Warrior exhibit.
Posted by Kimberly at 11:29 AM